Traveling in Spain: How Much Spanish Will I Need to Know?

Native English speakers are most certainly lucky when it comes to international travel, as in nearly every corner of the globe, your odds of encountering people who can speak English is fairly good. And the odds are especially good in European countries.

That said, many experienced travelers find that 100% English fluency should never be assumed, and many travelers find Spain to be one of the countries in which you’re more apt to have encounters with locals who aren’t able to converse in your native tongue. You’re almost guaranteed to find amenable staff at hotels and restaurants in larger cities who speak near-perfect English, and even the residents of the larger cities will often be able to converse in English—you may even find that they’re eager to practice!

That said, once you get out into the countryside, you may find that it’s much harder to get around without some cursory knowledge of local language—which itself can vary from region to region. Although Spanish is the official language throughout the country, there are other co-official languages in different regions of the country, including Aranese, Galician, Basque and Catalan, which many of the locals in Barcelona speak. 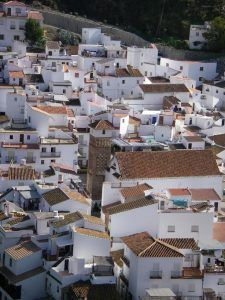 Regardless, you’ll likely find the Spanish people are very social and willing to help if you’re also willing to put in some effort. It fits in with the cultural norm in Spain—it’s considered rude not to take the time to talk with people. That’s why you sometimes hear complaints about visitors feeling as though they’re not being helped quickly enough in shops. It’s simply because the shopkeeper would find it rude to rush the customer before you! So if you have to approach a shopkeeper with phrasebook in hand, don’t worry! You’ll find the Spanish people to be very warm.

If you’re interested in a trip to the Spanish countryside, away from the major cities, but you’re not confident in your ability to manage with your own knowledge of the language and a phrasebook, you may be more comfortable on a guided tour. We offer six different guided walking tours, including some that explore Andalucia, Valencia, Tenerife, La Palma and La Gomera.

And remember: If you run into a situation where you’re having trouble communicating, keep smiling! Not only does a warm smile work wonders, but it’s also a good reminder to yourself that this challenge is all part of the joy of travel!