There aren’t many opportunities to sleep in the former home of a Pope. But on three of our tours, you’ll have exactly that opportunity to literally step into history by spending nights at an 11th Century Benedictine Abbey that was once the residence of Cardinal Della Rovere, who would go on to be named Pope Julius II—the Pope who commissioned the artist Michelangelo to create the famous painting on the ceiling of the Sistine Chapel.

The Relais Della Rovere comprises three buildings, the Benedictine convent that was built in the 1100s, a Renaissance villa built in the 1400s, a farmhouse built in the 1800s, as well as a courtyard between the convent and the villa. The transformation of the historic buildings into a modern hotel provide for a charming contrast of old and new, past and present. You’ll walk the wide halls and note historic details, including exposed brick and beams, and you’ll also enjoy all the modern luxuries. The grounds of the hotel are just as charming, and provide ample opportunity for strolling and enjoying the Italian countryside, or for quiet contemplation.

Several of our tours include stops at the Relais Della Rovere, including:

This tour provides the best of both worlds in Italian cycling tours: On this 10-day holiday, you’ll have the chance to explore classic Italian cities and scenic and charming Tuscan countryside. Just picture yourself exploring cobbled streets and discovering hidden town squares, cycling through the olive grove-dotted countryside from one historic village to another, and with the opportunity to check out the medieval city of Siena, as well as Florence, one of the most beautiful cities in the world. On this trip, you’ll spend four nights in the Relais della Rovere, which will give you plenty of time to enjoy the property, including the pool and gardens. 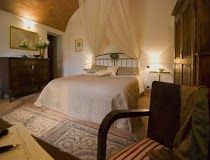 There is nothing like the rolling hills of Tuscany. This walking tour lets you explore the Etruscan trails through breathtakingly scenic vineyards, forests and countryside dotted with olive groves among sun drenched hills, as well as hamlets and medieval villages.  The self-guided hotel-to-hotel tour begins and ends in Volterra, a city that’s been inhabited as a city continuously since the 8th century BC. In addition to your two nights at the Relaise della Rovere, you’ll also have the chance to get in touch with history with optional city breaks in Pisa, Siena, or Florence.