To some people, a vacation’s hardly a vacation without that island feeling—sunshine, warm sand and the sound of surf lulling away all your worries. We don’t blame them! And here at Breakaway Adventures, we have plenty of options for an island getaway. One of our favorites takes you to the Maltese island of Gozo, a historic island with a long association with the ancient Homerian story of the Odyssey, in which the besotted nymph Calypso kept Odysseus for several years. Calypso’s island is named in the Odyssey as “Ogygia,” but sine the 4th Century, BC, the gorgeous island of Gozo has been associated with Calypso—it’s often called “Calypso’s Isle.”

The island is smaller than the island of Malta, and a perfect location to get away if you’re looking for a vacation that has all the warm character of the Mediterranean, but less-developed and more in-touch with nature.

Our Exploring Gozo trip is an independent walking tour that allows you total freedom to discover the island. You’ll stay in one hotel for the duration of your 8-day trip, leaving you plenty of time to explore, enjoy, and relax.

The hotel you’ll stay at in Gozo is situated among the Ta Cenc cliffs on the outskirts of the village of Sannat. The Hotel Ta’ Cenc comprises 83 stone buildings which are designed to live in harmony with the natural setting: 400 acres on the highest point on the island of Gozo, offering views of the Maltese archipilago, fragrant gardens, and protected natural landscape. The area  surrounding the hotel is marked by white globigerina limestone jutting out from the azure sea, ruts in the stone left by Neolitic man, and even remains of Neolithic Dolmens, among the oldest free-standing structures in the world.

On this trip, you’ll be able to explore Mgarr, the port of Gozo with its colorful fishing boats. Your suggested walking tours take you along paths that were followed by Turkish raiders in the 16th Century, along ancient mule tracks and to the remains of a temple that dates to the copper age. You’ll have the chance to visit the northwest corner of the island, which can only be reached by foot, and visit some of the many churches found on the island, including the basilica Ta’ Pinu, the neo-Romanesque shrine, and the Garb, a 17th Century Baroque church.

And in between all of this amazing history you’ll be continually stunned by the stark beauty of your surroundings: wide salt pans, breathtaking views of rocky cliffs jutting from the sea, fields alight with poppies, white sand beaches, groves of bamboo, or of lemon, fig and peach trees, and of course the infamous Azure Window—a naturally formed stone archway that perfectly frames the water and sky. There truly is no other place in the world quite like it. 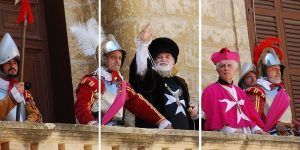