Adventurous Eater? Prove it with Guinea Pig in Peru!

Plenty of foodies say they have a taste for the exotic, but on our new tour, you’ll have the option to really test your adventurous foodies spirit, in true Traveler Vs. Food style by sampling a local Peruvian favorite, cuy, which we in the states call guinea pig.

Guinea pigs, of course, are neither from guinea nor are they pigs. They’re actually of the rodent family, and originated in the Andes. They’ve been domesticated as a food source for so long, in fact, that they don’t exist in the wild. And the fact is, while we are more used to looking at them as pets, they make an excellent food source. In fact, it’s such an important part of the Peruvian diet and culture that the replica of Leonardo Da Vinci’s Last Supper that hangs in the southeastern city of Cusco shows Jesus and the disciples dining on cuy.

While historically, cuy was a food reserved for special occasions and for royalty, today, it is eaten year-round and by all walks of Peruvians. In the countryside, it’s now common to find the guinea pigs kept by families in a small crate in the backyard. The family might feed the guinea pigs alfalfa, and even allow the creatures to cavort around the house until they’ve grown large enough to dine upon. 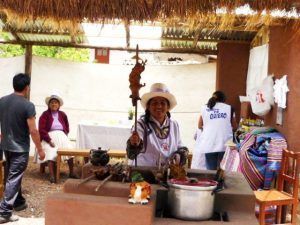 You won’t have any shortage of opportunities to sample cuy on our Machu Picchu and the Sacred Valley tour. Your trip starts in historic Cusco, staying in a 16th Century former colonial mansion on a charming cobblestone street. You’ll have plenty of time to explore the city, which was once the capital of the Incan empire, as you adjust to the altitude (over 11,000 feet). Even if you take the first day to rest, the second day of your trip involves a trip to the San Pedro Market, where you’ll find a vast array of exotic meats, tropical fruits, and local specialties like you’ve never seen, including cuy, which is often roasted and served on a stick, though it’s sometimes also fried or even made into a soup or stew.

Wondering what cuy will taste like? Many westerners are often surprised by how tasty they find guinea pig—while the animals are fairly small and bony, and some preparations can leave the skin fairly chewy—they’re often described as having a taste similar to small game or fowl such as rabbit and duck.